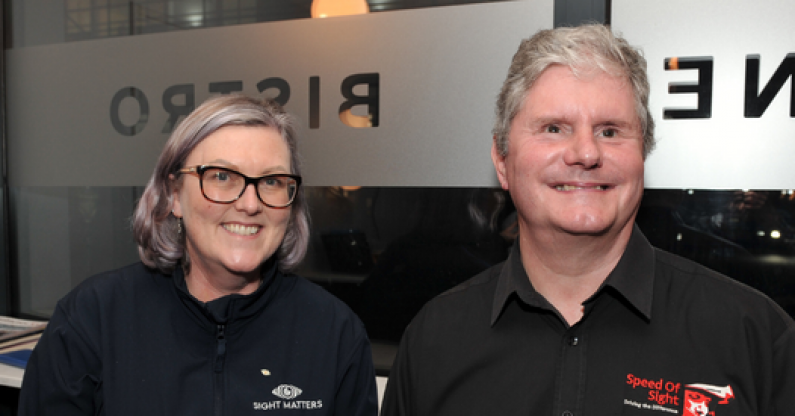 A charity initiative has been launched which aims to give 50 people here on the Island who are living with a disability the chance of a lifetime to drive a high-performance car.

But the organisers need more corporate sponsorship from businesses here on the Island to make the dream come true next year.

The initiative is a collaboration between the Isle of Man Chapter of BITA (British & Irish Trading Alliance) and Manx-registered charity, Sight Matters. Next April (25th to 27th) they plan to offer track day driving experiences at Jurby. Specially adapted vehicles, safety and audio equipment, and expert tuition will be provided by Bolton-based Speed of Sight which is the only charity in the world that offers this type of experience to people with any type of disability, including visual impairment. Since it was founded over 10 years ago, Speed of Sight has provided driving experiences for children of primary school age, up to people in their 80s.

A launch event this week – sponsored by EnviroTech and  Emico – was held at Refuge in Douglas to allow businesses and the media to find out more about the Isle of Man initiative. Guests included three of the Speed of Sight team – co-founders Mike Newman and John Galloway, and Mike’s wife Karen who is the charity’s Office Manager – who visited the Island for the launch, and to do a recce of the Jurby racetrack.

Brendon Kenny, Chair of BITA’s Isle of Man Chapter, was there too and commented: “BITA is all about bringing people together to make great things happen, and that’s why we have used our network to partner with Sight Matters and Speed of Sight to create this exciting and inspiring initiative. The positive response we have received this evening from all of our honoured guests – and the inspiring stories we have heard from Mike and his colleagues – have strengthened our determination to create a truly unique experience for 50 people here on the Island in April 2023. But we need more support from the generous Manx business community to help us create experiences and memories that will last a lifetime.”

If your business is interested in supporting the initiative, please email Jennie Thompson at jennie@ellanstone.com

Without doubt, the Isle of Man participants in next year’s track days will be able to draw confidence and courage from the example set by Speed of Sight’s CEO, Mike Newman. Born completely blind, he didn’t let that prevent him from carving out a successful career in business, or from pursuing his passion for driving and motorsport. After 25 years working for Barclays in the UK (during which time him he rose through the ranks to become a branch manager), he then went on to set nine world speed records. Today, his inspirational example, energy and enthusiasm continue to be a powerful driving force behind Speed of Sight. Mike currently holds six world land speed records for a blind driver or rider (four in cars, one in a truck and one on a motorbike). The list (so far at least) is completed by two speedboat records, and one as a blind pilot for flying the most number of loop-the-loops. He was the first blind driver in the world to reach 200mph – a feat he achieved in Nissan GTR in 2014.

All of these achievements have earned him the nickname ‘Super Human’ Newman, and the title of ‘world’s fastest blind man’. At the launch event, Mike and his colleagues spoke about the inspirational, joyous, and in many cases life-changing experiences that the charity has provided for thousands of people around the UK. Mike said the Jurby track would provide a perfect location and – because the 2023 event will be the first time Speed of Sight has held track days here on the Island – it was aligned to the charity’s mission to reach out to new regions and communities.

Not surprisingly, Mike and Speed of Sight regularly attract high-profile UK and international media attention. Click here to watch a Discovery Channel report about Mike Newman’s remarkable skills and achievements – and click here for a Behind The Visors report which shows how Speed of Sight track days work. Find out more about Speed of Sight’s media profile here.